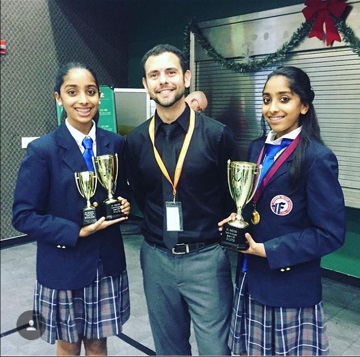 After honing their skills the NEA debate program for over a year from 2014 to 2015 the Savdharia twins entered 7th grade and were eligible to join their school debate team.

Where are they now?

Today, they compete for their day school in both the Orange County Debate League (OCDL) and Southern California Junior Forensics League (SCJFL).

How have they done?

During the 2015-2016 OCDL season, Hitakshi won 10th and 5th place speaker awards. She was also a member of teams that placed 4th, 3rd and 1st. Not to be outdone, her sister Harishri has taken individual 13th, 5th and 3rd place speaker awards, including a top 7th grade speaker award at the Fairmont Historic Anaheim Tournament in March 2016. As a teammate, Harishri too helped lead her own team to 5th, 2nd and even 1st place awards.

In the Southern SCJFL, the duo competed as a two-person team, debating public forum style and placing in the top ten speakers and teams in their category in both the Glendale Community College event (December) as well as the Irvine Valley College tournament (January).

In debate, the Savdharias are truly a powerhouse team, and they've made their former teammates and teachers at NEA proud!